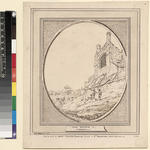 Description
Etching entitled "Abby [sic.] Church at St Albans Apr' 9 1779." View of St Albans Abbey on the right with three men and cattle on the left. The Abbey gateway canjust be made out in the background, making this the South side of the Abbey, looking towards the West End.
Drawn and etched by Benjamin Green, "Published and sold by Benj.n Green: Drawing Master to Xtd Hospital. London. Sep.r 9 1782."
From text style, which appears engraved rather than handwritten, "Ben Green Del.n & fecit" ("fecit" meaning 'made', in addition to "Del.n" meaning 'drawn') and fact it was published, as well as general appearance this appears to be etching, though at first glance looks like a pen and ink drawing.